020
Mars Mii Traps (Japanese: ペロリーナ Perorina) are monsters that appear in the Wayward Woods. They tend to appear alone, or with Smileshrooms.

Defeating this monster rescues a Mii's pair of eyes.

It is a fuchsia plant with a purple stem and leaves. It has a pair of female Mii eyes on its petals, which can open up to eat a Mii.

Its localized name is a pun of "Venus flytrap" as Mars is the opposite of Venus and it traps Miis instead of flies.

A Mars Mii Trap in the journal.

Encountering the Mars Mii Trap along with 2 Moles. 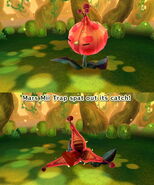 The Mars Mii Trap spitting out the eaten Mii.