023
Mage Goblins (Japanese: メイジゴブリン Mage Goblin) are monsters that can be found in the Nightmare Tower, Arid Frontier, and Karkaton Ascent. Defeating this monster rescues a Mii's pair of eyes with glasses.

Sometimes accompanied by Imps when being encountered. May come in teams of themselves.

Being a variant of a Goblin, the Mage Goblin is a short creature with pointy ears, a big nose and two exposed lower fangs in its mouth. Mage Goblins are grayish teal with dark teal spots on their head and back. In addition to the Mii eyes also possessed by other Goblins, Mii glasses are also attached to this monster.

Mage Goblin as viewed in the journal 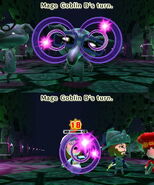 A Mage Goblin that was seen in one of the trailers for Miitopia for Switch.