N/A
The MP Candy (known as MP Sweets in the European English version; inconsistently termed between either in the US Switch version) is a type of snack.

A Mii cannot carry more than two MP Candies per venture. When consumed, it restores magic points (MP) of a Mii in battle.

The more MP Candies used by party members, the more effective they will become. Originally they restore 10 MP on use, but they can be powered up to 200 per use.

A bag of MP Candies. 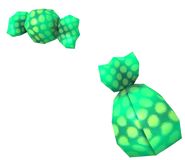 MP Candy sometimes being called MP Sweets in the US Switch version. 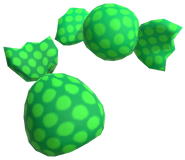