120
The Lizardman (Japanese: リザードマン Lizardman) is a green reptilian enemy which inhabits Nimbus, Peculia, and certain temporary dungeons. They frequently come in pairs and accompany other foes.

They are dark green bipedal lizards with spikes running down their tapering backs. They carry a dagger and shield and have a bandage on their dagger arm. They have Mii eyes, each attached to the side of their head.

A Lizardman in the Journal.

A Lizardman using its regular attack. 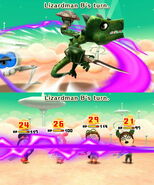 A Lizardman using its slash attack.

A Lizardman defeated by Monster Dinner.

A Lizardman defeated by Righteous Anger.