Under the Dark Lord's control, they have a set of Mii eyes and eyebrows.

A Lightning Cloud in the Journal. 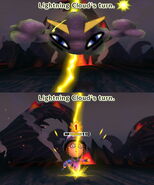