206
The Iron General (Japanese: アイアンコング Iron Kong) is an enemy which turns up in New Lumos.

It behaves like other "gorilla" enemies, having a strong single-target move and a whole-party attack.

It boasts high durability and attack as well as being paired with other tough foes.

It is a large, stocky gorilla-based foe, with silver fur and a chrome face and gauntlets. It wears metallic armor, with the breastplate attached to its massive chin. It also wears a metal cape with a hexagon logo and the word "IRON" in the Miitopia language on the back.

Encounting The Iron General on a post-game quest. 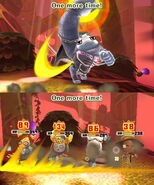 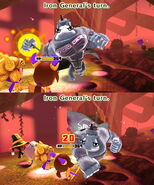 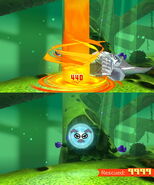 An Iron General that's been defeated.

Coming across an Iron General boss.

The Iron General with its guard down.