Inns are areas in the game that fully heal the party overnight, unlike Camps; Inns allow the player to interact with them in various ways. They serve as the goal/finish line for each stage.

In the Nintendo Switch version, the Inn also includes a stable to its left once the player acquires the horse. In the same version, a separate room to its right is used to display the current guest party member the player has. Unlike the player's party, the player can not interact with the guest in the Inn in any way. The Inn has a Mii capacity of 10. However, a Villa will open up immediately post-final boss that holds up to 90 Mii characters. The player can switch out or send to and from in between these two places through the menu under "Sort party" button while still in the Inn.

After every fourth venture, two Mii characters will be seen resting, and the player will be asked if they want to keep playing (Continue playing) or stop for now (That's it/Finish for now). Either way, their progress will be saved.

At the last stage of each world, from Greenhorne to Realm of the Fey, the Dark Lord will steal the player's team and cast a spell on the Inn, which puts a curse on the main protagonist Mii which seals away their powers, losing their job and returning them to their traveler clothes. This occurs at the Inn. However, on the third time he/she steals the player's friends, he cannot seal their powers away, because the Gift of Divine Power has grown strong enough to leave them invulnerable to the Dark Lord.

Starting with the defeat of the Dark Lord, a random party member can get sick upon arriving at the Inn, signified by an "Emergency!" warning screen. This happens at random after ventures. Sickness does not apply to the Hero until the Darker Lord is defeated for the first time. When a sickness happens, the sick Mii can not join the active party, can not be interacted normally (can not be fed grub, can not be taken out for outings, etc.) and the only available Inn event for the sick Mii is the "Cold" event, which may or may not instantly recover that Mii depending on whether his/her relationship levels up from the event or not.

Usually the player needs to acquire a certain amount of XP from adventures to heal the sick Mii, which increases in amount based on their level. The amount of XP needed to acquire is not shown when viewing a sick Mii at the inn. A sick Mii will also heal immediately if their relationship goes up one level during specific Inn events, if the party is separated by falling rocks, or if the player starts the final battle.

Animation when the party enters into an Inn.

The Mii characters in the Inn in the 3DS version.

A Mii comes back with new chothes.

A Mii comes back with a HP Banana instend of a new weapon or armor.

The Inn's main menu in the 3DS version. 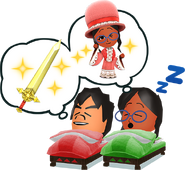 Screenshot of the party select menu without any Mii characters, visible via hacking the game.

Official artwork of Gold, the main currency of the game.

Picture of an event that happened at the Inn.

A mii going into the Arcade to play Rock Paper Scissors.

Inside the Inn in the Nintendo Switch version.

The Grub menu in the Nintendo Switch version.

The Youngest Fab Fairy in her own room in the Inn.

The Inn with an empty stable as a result of a party split event in the Nintendo Switch version.

Set out party screen in the Nintendo Switch version.
Community content is available under CC-BY-SA unless otherwise noted.
Advertisement