198
The Ice Tower (Japanese: 氷球タワー Ice Ball Tower) are monsters that appear in the 3rd District of New Lumos as well as Tschilly Peak of Powdered Peaks, typically for quests. They tend to appear in pairs, or alongside other monsters.

Even though there are six Mii eyes on an Ice Tower, defeating this monster only rescues two of them.

As its name suggests, this monster is similar to the Spike Tower. It's a stack of three spiked, ice balls forming a tower. They're simple and blue with white spikes. The bottom ice ball is the largest, while the middle ice ball is the smallest. Each ball has two Mii eyes in the center.

Encountering the Ice Tower along with a Very Dangerous Bomb and a Water Snurp. 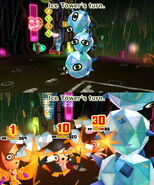 The Ice Tower attacking three Miis at once.