Magic All
Spite
One More Time!

It has the face of a Thief's friend on it and defeating it will reward the player with a Sky Scraper Jewel to open the Sky Scraper.

The Ice Queen, inspired from the Nordic mythological creature of the same name, is a humanoid female whose lower body is shaped like a twister. She has purple hair, two icy crystals on the back of her head, bluish white skin and blue clothing and gloves. Icy wind and snowflakes swirl around this monster. The Traveler's friend's face is attached to this monster's own face.

The player will accept the quest in the Travelers' Hub from a Thief who states that his/her friend found a weird-looking jewel before being immediately kidnapped by a monster that swooped down from the clouds.

The player then travels to Powdered Peaks where they go into Ghontu Cave and have the party separated. Shortly after they reunite, they will then battle the Ice Queen and restore the kidnapped Mii's face. The thankful Mii then hands them a Sky Scraper Jewel to open The Sky Scraper.

The Ice Queen "Kidnapped Friend" in the Journal. 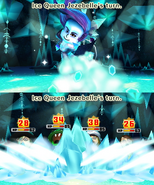 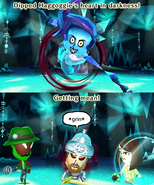