095
The Ice Maiden (Japanese: 雪女 Yuki-onna; Snow Woman) is a monster in Miitopia. It is the icy version of a Banshee and is found in Ghontu Waste. They are fairly weak, but they tend to appear with much stronger enemies.

Defeating one will relinquish a Mii mouth.

The Ice Maiden looks like a cyan Banshee with icy hair. Unlike other Banshees, it has no eyes, but it still has eye sockets, giving a creepy look. Its only Mii part is a mouth.

An Ice Maiden in the Journal.

Encountering the Ice Maiden along with two Fossils.

The Ice Maiden attacking a Mii. 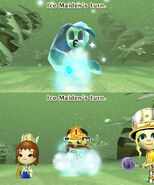