139
I, Medusa (Japanese: オメメデューサ Ome-Medusa; pun of omeme (eye), and “Medusa”) is a monster in Miitopia. They tend to appear in pairs or alongside other monsters. Rarely will they appear alone.

Defeating one will relinquish a pair of Mii lips and eyes.

I, Medusa is based on the similarly-named creature from Greek mythology. It appears to be a green-skinned human female with spotted dark green living snakes as its hair and a dark blue serpentine body. Under Dark Lord's control, each snake have a Mii eye (meaning five eyes in total), while a Mii mouth, which is always some sort of lips, is attached to I, Medusa's face.

An I, Medusa in the Journal.

An I, Medusa attacking a Mii. 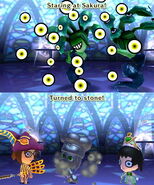 An I, Medusa petrifying a Mii, turning them into stone.

An I, Medusa defeated by Monster Dinner.

An I, Medusa defeated by Righteous Anger.