The horse is a character introduced in Miitopia for Nintendo Switch.

The horse, by default, is brown and has black bead eyes, white line on the front of its face, gray mane with white tips, black muzzle, tail, and hooves, and white legs. It is about twice the height of an average Mii. Its appearance can be customized in its own menu.

The horse is first encountered by the party in Easin Hills after rescuing all the faces of the Greenhorne town residents. It was found surrounded by three Goblins. After defeating those monsters, the hero's party leaves it be, but they soon realize that the horse is following them. The protagonist then welcomes the horse to the party and names it, allowing it to join for adventures. The horse is tucked in a stable located to the left of the Inn, and the horse is the only party member (aside from the hero) to not be captured by the Dark Lord between the games first four worlds.

Whenever the party gets split in half as of the falling rocks event, the horse will always remain with the Hero/Leader's team, same as with guest party member's.

The horse can be bonded with to increase its relationship level either by playing out Inn events related to it or by using Horse Outing Tickets. The horse can be ridden by one of the party members during exploration via Saddle Up or Saddle Up II, and participate in battles, where it is capable of acting using assists, since the horse does not have a turn of its own. In addition, it is randomly available for any Mii with a relationship of Lv. 2 or higher to execute special attacks instead of the Mii's basic attack. The AI will always use this option when available. Unlike regular relationships, there are no quarrel mechanics between the horse and party members.

Having the horse in the party can trigger a variety of related events while exploring, some of which increase relationship with the horse. It can also intervene in "tension" events in place of a regular party member. However, most of these new events are never available in random dungeons a la the Camp cutscenes despite the repetitive nature.

When assist skills are activated, the game will use the horse's stat instead of the attacker's for that damage calculation, which is decided by the user's level.

Since the stat of the horse is fixed, assist skills may deal less damage than normal attacks if the attacker's stat is significantly higher than the horse's.

The horse may assist a party member randomly. Passive effects such as Snuggle Up are not influenced by any Mii's "Attack" action. In the Hero Mii's case, the "Attack" option will be replaced with "Horse", giving the player access to any of the unlocked horse-based combat assists. Most status effects block the Mii from being assisted by the horse, however, though the Neigh assist (removes negative status effects) may randomly trigger on a Mii with certain ailments before said Mii can take an action that turn.

Certain assists have varied effects which are elaborated below. Variant names are taken from their internal names and are not named in-game.

The assist Mounted Attack will turn the Mii's standard attack into either a boosted single-target attack or a wide-target one. There are three variants of this assist. The higher tier this assist is, the more powerful the damage inflicted.

The assist Snort is an all-target magic attack. Like Mounted Attack, there are three variants of this assist. The higher tier this assist is, the more powerful the damage inflicted.

The assist Horse Whispering is the only skill that varies in effect depending on the job using it. It requires the hero Mii to have full MP in order to be able to use and will not activate with Auto Battle on. Other Party Members also can't use it. The following is the list of jobs and associated effects. It is called Horseplay in the European version. 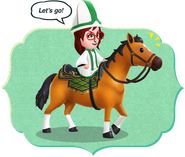 The party noticing the horse following them.

The horse after winning a battle.

The horse following the hero's party during an exploration.

The horse after being rescued. 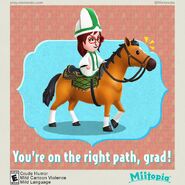 Graduation eCard depicting the horse with a Cleric from Play Nintendo.

The horse surrounded by a group of Goblins.

The continue playing screen with a Warrior and the horse.

Another possible "continue" screen with the horse.

The horse's response when "continue playing" is selected.

A horse posing with a team after winning a battle.

A horse along with party members by the campfire.

The hero, the horse, and their party members before the credits.

The horse posing together with the hero and his/her party members.

A wide-target Mounted Attack performed with the Warrior.

A wide-target Mounted Attack performed with the Thief.

A single-target Mounted Attack performed with the Cleric.

Mounted Attack done by a Cleric.

The horse being ridden by a Thief in Nimbus.

The horse being ridden by a Warrior in Castle View.

A Saddled Up Thief falling off at the start of a monster encounter.

Two Mii characters riding on the horse together. Only one needs Saddle Up II unlocked.

The horse using Snort for the first time.

The horse using Cheek Rub for the first time.

Two Saddled Up party members falling off at the start of a monster encounter.

Snort II being used for the first time.

Mounted Attack II being used for the first time.

Neigh being used for the first time.

Cheek Rub II being used for the first time.

Snuggle Up II being used for the first time.

Neigh II being used for the first time.

Mounted Attack III being used for the first time.

Cheek Rub III being used for the first time.

Snuggle Up III being used for the first time.

Snort III being used for the first time.

Neigh III being used for the first time.

The horse during a seaside outing.

The horse and a Mage during a fishing spot outing.

Reeling in outing event, with nothing caught.

The white horse bonding with a Mage.

The horse bonding with a Cleric.

A Cleric feeding the horse.

The juice drinking event as demonstrated by Nintendo of America on Twitter. This scene somehow occurs at Neksdor Desert, which is not possible for players.

A Chef offering the horse a carrot (first event).

Feeding bucket event, but there is still food left.

Fond memory event with the horse.

A Thief reads a book while the horse watches.

Horse attention event, where the right Mii reveals that he has put on hay-scented lotion.

Tense Situation event, with the horse stopping the fight from breaking out.

The Horse drinking the juice in the Citrus Cave and a Flower joins in.

Two Mii characters running with the horse in Powdered Peaks.

Two Mii characters trying to warm up at Tschilly Peak, with one Mii riding the horse.