The Hobgoblin Mage (Japanese: メイジグレムリン Mage Gremlin) is a monster in Miitopia. It is the strongest variant of the Hobgoblin. Although it casts no magic, as one would expect from a mage, its claw swipe attack causes magic-based damage, just like other Hobgoblins.

It is a magenta-colored Hobgoblin with a dark gray stomach. Both ears have cuts and silver earrings. Three Mii eyes are attached to it.

A Hobgoblin Mage in the Journal. 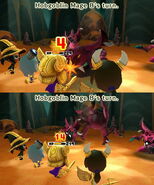 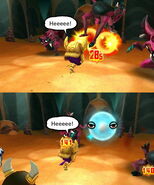 A Hobgoblin Mage that has been defeated.