141
The Hobgoblin Bully (Japanese: グレムリンII Gremlin II) is a monster encountered in The Sky Scraper. It is merely a stronger version of the normal Hobgoblin. They often appear in pairs and alongside other enemies, such as Death Butterflies.

Defeating it will relinquish a single Mii eye.

As it is a stronger Hobgoblin, it is physically identical, except that its ear ring is on its left ear and the creature is a murky cyan. The Mii part attached to it is a single eye.

Encountering an Hobgoblin Bully along with two Death Butterflies.

A Hobgoblin Bully attacking a Mii. 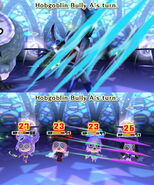 A Hobgoblin Bully with its guard down.