Miitopia Wiki
Register
Don't have an account?
Sign In
Advertisement
in: Monsters, Hobgoblins, Realm of the Fey, Karkaton

055
The Hobgoblin (グレムリン Gremlin) is a monster in Miitopia, first encountered in Bigg Forest of the Realm of the Fey. They tend to appear in pairs and will sometimes team up with Bansheevils. They are surprisingly strong and fast at this stage of the game and can possibly overwhelm inexperienced players.

Defeating this monster will relinquish a pair of Mii eyes.

The Hobgoblin, named after the legendary creature of the same name, or, in the case of its Japanese name, the folkloric creature associated with machinery malfunctions, is a large blue long-eared creature with two large, exposed canine teeth on its upper jaw, round gray stomach, and razor sharp claws. Its right ear has a large cut and a purple earring on it. It has dark blue spots on its head and back as its markings. Under Dark Lord's control, a pair of Mii eyes are attached to it. 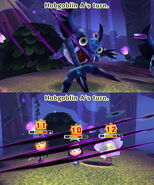 A Hobgoblin defeated by Monster Dinner.

A Hobgoblin defeated by Righteous Anger.