Miitopia Wiki
Register
Don't have an account?
Sign In
Advertisement
in: Monsters, Harpies, Realm of the Fey,
and 4 more

174
The Harpy (Japanese: ハーピー Harpy) is a monster found during post-game, low-leveled quests from the Travelers' Hub. It tends to appear with multiples of its own kind and also with stronger monsters.

Unlike the typical harpies of fiction, this version is a small winged creature that is entirely white in appearance with four, insect-like legs; a tiny nose and cat-like mouth. It's much smaller compared to its variants. This monster also has Mii eyes attached to its face.

A Harpy in-battle along with a Pop. 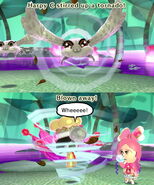 A Harpy blowing a party member away.