109
The Hamburger (Japanese: ハンバーガー Hamburger) is a quest boss in Peculia. In one quest, a Mii wants to eat a hamburger from Peculia, but then finds out that it is far more lively than expected.

Its main gimmick is "eating" a Mii to prevent them from fighting.

It looks like a regular cheeseburger with a hamburger patty, lettuce, tomato, cheese, sesame seed, or white onion fangs, a furrowed bun and a huge hammy tongue.

Its Mii parts are eyes on its top bun.

During the first visit to Travelers' Hub, one of the quest clients encountered is a Chef who wants to try Peculia's Hamburger, only for it to turn out to be a monster that must be defeated.

After defeating it, the party is rewarded with 1,000 G from the Chef, who then leaves. 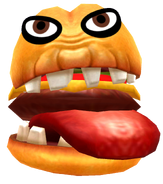 The official artwork of the Hamburger. (Nintendo 3DS version)

The Hamburger in the journal.

The Protagonist Mii and the guest Chef encountering the Hamburger.

The Hamburger in battle, along with two Bread.

The Hamburger attacking a Mii.

The Hamburger using Spit Out.

A mii inside a hamburger in the Switch version.