218
The Ham Sandwich (Japanese: ハムサンド Ham Sandwich) is a post-game enemy found in New Lumos and temporary dungeons only available in quests. It's a stronger variant of the Bread monster.

Defeating it will rescue a pair of Mii eyes and a Mii nose.

The Ham Sandwich is an animate, floating sandwich consisting of two slices of grilled bread, a slice of ham, some lettuce, and a slice of cheese. A pair of Mii eyes and a nose are attached to the bread and ham.

A Ham Sandwich in the Journal.

The Ham Sandwich attacks three Miis at once. 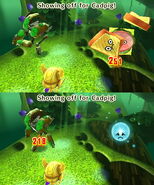