N/A
The HP Banana is a type of snack. A Mii cannot carry more than 2 HP Bananas per venture. When consumed, it restores health points (HP) of a Mii while they are out adventuring or in battle.

The more HP Bananas used by party members, the more effective they will become. Originally they restore 20 HP on use, but they can be powered up to 500 per use.

A bunch of HP Bananas. 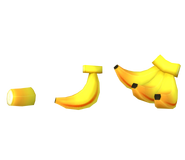 3D models of the HP Banana (half, single, bunch). (3DS version)
From The Models Resource. 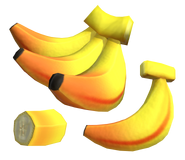 3D models of the HP Banana (half, bunch, single). (Nintendo Switch version)
From The Models Resource.
Community content is available under CC-BY-SA unless otherwise noted.
Advertisement