019
The Griffin (Japanese: グリフォン Gryphon) is a monster that appears in the Arid Frontier as a boss and the western part of Neksdor as a regular monster.

It may appear alone, or with another Griffin or monster(s).

The Griffin's appearance is based on the legendary creature of the same name, with the only difference being that its front legs are those of a lion's like the rest of its body. It has pointy ears that are always perked up on its head, black beady eyes, a hooked beak, a pair of large feathery wings (adorned with Mii eyes on the undersides when under the Dark Lord's control), and a feline body shape. The Griffin sports a brown color scheme.

When the party goes to pick up the Prince of a Nearby Land, the Griffin ambushes the party. Even with the useless prince, the party manages to defeat it.

In West Neksdor Desert, an optional "shortcut" will lead to two Griffins attacking at once, which are nigh-impossible to defeat on the first trip. They guard a large chest that contains a piece of equipment. 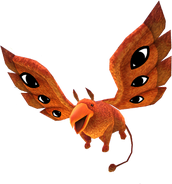 A Griffin as seen in the Journal.

A docile Griffin without Mii eyes appearing in Karkaton, with the Great Sage letting it go free.

A Griffin defeated by Monster Dinner.

A Griffin defeated by Righteous Anger.