238
The Great Harpy (Japanese: グレートハーピー Great Harpy) is a monster in Miitopia. It is one of the Harpy-based monsters. It often appears in groups of two and typically flanks other enemies, including bosses.

Like other Harpy variants, the Great Harpy is universally hated for its dreaded Tornado attack.

Unlike the typical harpies of fiction, the Great Harpy is a large, winged creature with red plumage and four, pink, insect-like legs. This monster has Mii eyes attached to its wings and a Mii nose and a Mii mouth attached to its face. As its name suggests, it is much bigger compared to other Harpy variants.

Not counting Medals or the Red Fiend, the Great Harpy is the last non-boss enemy in the Journal.

A Great Harpy in the Journal. 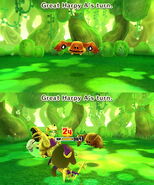 A Great Harpy attacks a Mii. 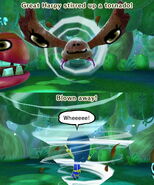