The Gold General's appearance is the exact same as its predecessor, except having gold fur with silver armor and a brownish-red cape.

The Gold General "Princess" in the journal. 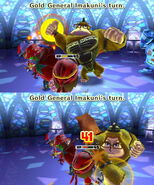