184
The Glamorous Pharaoh (Japanese: ゴージャスファラオ Gorgeous Pharaoh) is an enemy found in the 3rd District of New Lumos. It can also appear in quests as a regular enemy.

It behaves just like the Pharaoh "Genie" boss, but its curse is pink.

It often shows up with other enemies, including Terror Fiends.

This Pharaoh is magenta with a checkered purple/navy pattern on the headdress. Its chin is purple and wears blue earrings. It has Mii eyebrows, eyes, and mustache.

Which Travelers' Hub quests that feature this monster seem to be completely random, as do the dungeon location and the quest rewards.

Tip: Save it for last, especially if Terror Fiends are present. It is bulky but not very strong.

The Glamorous Pharaoh can be encountered either as an enemy or as a quest boss. The boss version has more HP, though its other stats are lower compared to the regular version. Its capability of taking two actions in one turn makes up for it, however.

A Glamorous Pharaoh in the Journal.

A Glamorous Pharaoh in-battle along with two Licorice Jellies.

A Glamorous Pharaoh taking damage via a Vampire's Curse. 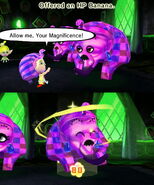 A cursed Mii offering their HP Banana to a Glamorous Pharaoh.

A Glamorous Pharaoh defeated by a Chef's Monster Dinner.