225
The Giant UFO (Japanese: 大型UFO Large UFO) is an enemy who can attack and steal HP Bananas. It is a tougher version of the UFO enemy. Giant UFOs are often found in groups, either with their own kind or with other enemies. Occasionally, they can team up with bosses, making said-bosses even more of a threat.

As its name suggests, it is a larger version of the UFO enemy. Unlike smaller UFOs, Giant UFOs are metallic silver with gold patterns, and have a pair of eyes and a nose.

Tip: They have an enormous amount of HP, so it is recommended that a Cleric can use Righteous Anger on them if you want to lose as few HP Bananas as possible in battle. They can also be hit by Dancing Arrows every turn to prevent them for ever making a move.

A Giant UFO in the Journal.

The Giant UFO attacking a Mii.

A Giant UFO stealing HP Bananas from a Mii.

A Giant UFO that is distracted.

A Giant UFO with its guard down. 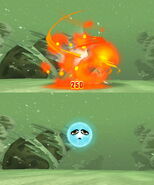