The Genie of the Lamp is a character that appears in Miitopia, and is the (former) main antagonist of the Neksdor arc. He is a large, mischievous genie, that once terrorized all of Neksdor with his bothersome magic, until the Great Sage sealed him in a lamp.

Despite this, he managed to catch the attention of the Prince of a Nearby Land, who was depressed about being rejected by the Princess of Greenhorne. Upon promising the prince that he will grant any wish he desired, he was freed, and stole all of Neksdor's gold thereafter. After an encounter with The Protagonist almost sealed him within a lamp, he had a change of heart, opting to instead help out in Neksdor Town, rather than terrorize it.

Long ago, the Genie was sealed away in a lamp and put into a deep sleep. After years of imprisonment, however, The Genie awoke from his slumber and continuously terrorized the region of Neksdor, causing no end of trouble to its residents. Eventually, he was sealed back into his lamp by the Great Sage, which became scattered into the Neksdor Desert.

Freedom and Raid of Neksdor

Some time after being sealed away the second time, his lamp is encountered by the Prince of a Nearby Land, depressed from his rejection with the Princess of Greenhorne. As he approaches the Prince, he tells of how he is a guardian spirit who was simply "minding their own business", until an "evil" sage came and sealed him within a Lamp. The Prince, unsure on whether he should release him, is convinced of otherwise when the Genie mentions that he will grant whatever wish he desires. Thus, the Genie is freed from the lamp.

Upon being freed, the Genie admits that he was kidding about the wish, considering lying and kidding to be the same thing. As he dismisses the thought, he decides to declare his freedom by raiding Neksdor Town. There, he steals all of the Desert Celebrity's gold and takes it to the Underground Maze.

Close Encounter and Change of Heart 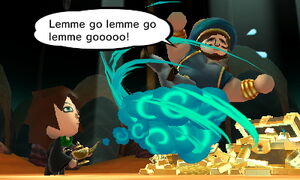 Within the Underground Maze, the Genie boasts about all the gold he now has, going behind a door guarded by a Minotaur to admire it. As the Protagonist arrives, the Genie blows off their demands to return the gold, saying that the Desert is his own turf. This later proves to be a fatal mistake, as he realizes that the Protagonist had gotten hold of the lamp. The Protagonist begins to chant his name, causing him to nearly be sealed in the lamp again. After pleading with the Protagonist to free him, he agrees to return all of Neksdor's gold.

Back in Neksdor Town, the Genie apologizes to the Desert Celebrity and returns all of her gold, catching the attention of the entire town in the process. Suddenly, however, the town is attacked by the Dark Lord, who steals the faces of many of the townspeople, including the Genie.

Rescue in the Great Pyramid

With his face restored, the Genie once again admits his change of heart, and now sees what it is like to lose something that is precious. He then decides to atone for his trouble in the past by working for the Desert Celebrity, but not before helping out the Protagonist by blowing away a rock slide. 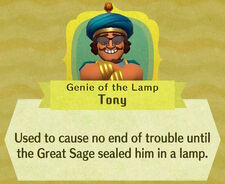 The Genie of the Lamp is a large, humanoid genie that rests on a large, blue cloud. He wears a sleeveless, blue shirt layered by a blue vest with a blue turban, with an orange feather sitting on top of the turban. Much like the King of Greenhorne and the Dark Lord, the Genie is much larger than normal Miis, having a large, muscular outlook. He also has a short mustache flanked by a short beard, its color depending on the hair color of the Mii cast as the Genie.

When he is first introduced, the Genie is a cocky, mischievous troublemaker who knows no end to his trouble, going so far as to steal all of Neksdor's gold for himself. It was for this reason that the Great Sage sealed him in a lamp, although he did not learn his lesson when he was freed. After almost being sealed away a second time, the Genie becomes more of a kind, redeeming individual, deciding to atone for his trouble by working for the Desert Celebrity in Neksdor Town.

Official artwork of the Genie and the Prince from a Nearby Land.

Official artwork of the Genie, among other major NPCs.

The Genie is freed from the lamp.

The Genie with the gold stolen from the Desert Celebrity.

The Hero uttering the Genie's name.

The Genie along with the Prince from a Nearby Land in the end credits.

The Genie's letter to the Hero.