024
The General [Princess] (Japanese: "Mii's name"将軍 General "Mii's name") is a gigantic, muscular gorilla that appears in Miitopia. As the end-boss of Greenhorne, the General utilizes the stolen face of the Princess, who's face was stolen during the Dark Lord's raid of Greenhorne Castle. Harder versions of this boss include the Yeti and the Gold General "Princess", while its enemy counterparts include the Troll and the Iron General.

Unlike other monsters in the game, the General speaks and has a personality, depicting him as narcissistic and pompous over his minions.

During the siege of Nightmare Tower, the General is placed in charge of the Tower, using the stolen face of the Princess. He is eventually confronted by the Besmirched Noble's Son, who had ventured into the tower to reclaim the Princess's face. Because of how weak the Nobleboy is, the General doesn't even notice him at first, instead mumbling to himself over how beautiful the Princess's face is. It isn't until after four turns that the General realizes the Nobleboy's presence, and swiftly knocks him out with a single punch.

The General makes a minor appearance in Miitopia: Casting Call, appearing briefly in the "Venture Forth" trailer. In Nightmare Tower, the Cat walks ahead of the rest of the party, before stopping in shock as the General appears, wearing the Princess's face. As the entire party stares at him in shock, the General gloats about the gorgeous face he had received, before teasing them to take it back. He then prepares his Shock Wave attack, and winks as he unleashes it.

The General takes on the appearance of a giant, muscular gorilla with pink fur and light pink skin. Around his arms are various iron bands that go around his wrists and upper arms. As a soldier, he also wears large, plated armor on his chest, which appears to be scratched in his official artwork. He also noticeably wears a cape that drapes over his back, although it is not attached to his armor. Rather, it is bolted directly onto his back. On his head, he wears a small, crested helmet, showing his General title.

Unlike other monsters, the General is given his own personality, albeit briefly. In both his encounter with the Nobleboy and in Miitopia: Casting Call, the General is a narcissistic individual that gloats about himself often. He can even be so into himself that he does not notice things happening around him until a few moments later, such as the Nobleboy confronting him (although, it could be argued that he didn't notice because of the Nobleboy being weak). In battle, however, his mood changes entirely, using brute force over intelligence by punching his opponents, as real-world gorillas tend to do. 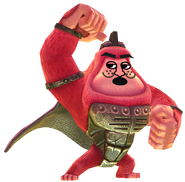 The General "Princess" in the Journal.

The General talking to himself, paying no attention to the Besmirched Noble's Son.

The General attacking the Besmirched Noble's Son, instantly knocking him out. 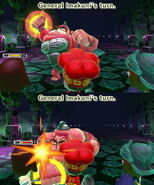 The last few rounds of the Besmirched Noble's Son's fight against the General in the Nintendo Switch version. 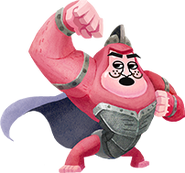 Official artwork of the General "Princess" for the Nintendo Switch version.