Scholarly Pioneer
Monsters
Galados Isle (Japanese: ガラパス島 Garapasu-tou; Galapas Island) is a post-game region. It is a tropical island located far from the mainland Miitopia. It's divided into four areas: Galados Isle, Seaside Grotto, Midland Marsh and Uncharted Galados. The first area is the beach, the second is the cave, the third is the marsh, while the fourth is a hidden area that requires going into a portal at the far end of this region.

The Scholarly Pioneer can be found in this region, being the only non-playable Mii here. 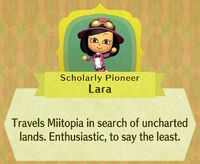 She is always looking for new discoveries but doesn't really know what she is looking for, leading to her mistaking the player for a native at every encounter. She however knew about the island's treasure in the Uncharted region, locked behind a door.

Upon completion of the Uncharted region and after getting the Elf Charm, talking to the Scholarly Pioneer reveals that the Worried Explorer is her older sibling.

Introduction screen in the 3DS version.