245
The Frog Queen (Japanese: カエルクイーン Kaeru Queen; Frog Queen), along with the Frog King, is the boss of the 3rd District of New Lumos.

The Medal "Blown out of the water" is gained by defeating her and Frog King.

After her defeat, she can be fought again once daily.

The Mii with the face put onto the Frog Queen is unknown.

She is a Frog-type monster. The Frog Queen has a big body, similar to the “Youngest Fab Fairy” Frog, with a pink shading on her black/purple body and has a Mii's eyes and mouth. When she breathes in, her stomach becomes light pink.

The Frog Queen in battle alongside the Frog King. 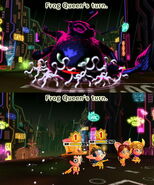 The Frog Queen attacking Mii characters with a splash-like attack.

Frog Queen in the Journal.