244
The Frog King (Japanese: カエルキング Kaeru King; Frog King) along with the Frog Queen are the bosses of the 3rd District of New Lumos.

The Medal "Blown out of the water" is gained by defeating him and Frog Queen.

After his defeat, he can be fought again once daily.

The Mii with the face put onto the Frog King is unknown.

It shares its design with the "Youngest Fab Fairy" Frog. The Frog King has a big body. He also has green shading on his black/purple body, and has a Mii's eyes and mouth. When he breathes in, his stomach becomes light blue.

The Frog King in battle along side with the Frog Queen. 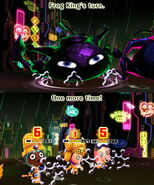 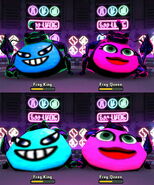 The different bloated forms of the Frog King and Queen.

The Frog King with his guard down.