180
The "foot" variant of the Fossil (Japanese: カセキ Fossil) is a monster in Miitopia. This enemy sometimes appears in Tschilly Peak of Powdered Peaks and in New Lumos.

This enemy is weak and can be easily beaten, but may be accompanied by other foes. It has the same name as its leaf variant and fish variant.

It is a blue slab of stone containing a fossilized footprint. It has one Mii eye and a mouth on its imprinted foot mark.

Encountering The Fossil (Foot) along with a Rock Hopper.

A Fossil (Foot) attacks a Mii. 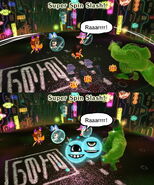 A Fossil being summoned by a Cobra