090
The Flaming Wind (Japanese: ねっぷう Hot Wind) is a monster that can be found in the Dark Lord's Castle. They tend to appear in pairs and rarely, in threes. They have also been known to appear with other stronger enemies, such as Blue Minotaurs and Clever Imps.

Defeating one relinquishes a pair of Mii eyes and eyebrows.

It is a sentient flaming twister colored orange. Under Dark Lord's control, a pair of Mii eyebrows and eyes are attached to it.

Flaming Wind in the journal. 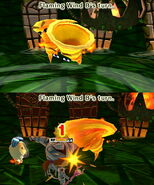 The Flaming Wind attacking a Mii.

A Mii getting burned by Flaming Wind (Switch Version)