179
The Facerberus (Japanese: カオベロス Kaoberos) is a powerful monster which can be found atop Powdered Peaks and in New Lumos. It can also be encountered in certain temporary dungeons. It is the only non-boss Cerberus variant.

Being a Cerberus, it is a three-headed canine. Its collar is light blue with metal spikes. It has a cyan pattern on its back and heads. Its Mii parts an two eyes on its outer heads and a nose on its middle head.

A Facerberus in the Journal.

Encountering The Facerberus along with a Snow Griffin. 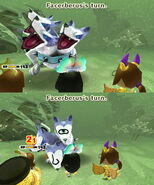 The Facerberus attacking a Mii. 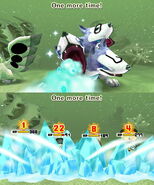 The Facerberus using an ice attack. 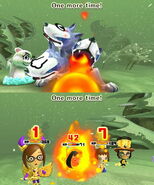 The Facerberus using a fireball attack.

A Facerberus defeated by Monster Dinner.

A Facerberus being defeated by Righteous Anger.