250
The Evil Sage (Japanese: 黒の大賢者 Kuro no Dai-kenja; Black Great Sage) is the boss of New Lumos's 7th District and on floor seven of the Tower of Dread.

It fights similarly to the Right Hand of the Darker Lord.

The Medal "Not so wise after all" is gained by defeating it.

It can also be fought daily on its own when defeated.

The Evil Sage's design is identical to that of the Darker Lord, albeit with a generic eye. It is entirely black with yellow outlines, and it wields the same staff its real counterpart holds.

Tip: Defense is as important as attack here, as its flame attack can easily kill or critically damage Mii characters and the all-target magic will put a dent in even the toughest parties. Barriers from either a Mage or player-controlled Elf will help mitigate its damage.

Tip #2: It cannot use the all-target magic twice in a row, which can help plan for deadly attacks. It can however lock on immediately after the flame magic.

The Evil Sage in the Journal. 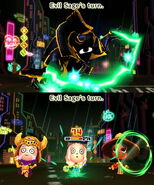 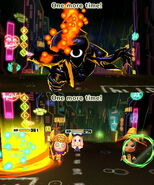 A Mii takes a critical hit from the flame magic. 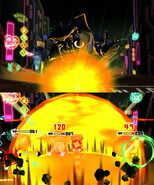