029
Evil Moles (Japanese: ワルモグラー Waru-Mogura) are monsters that appear in Neksdor. They tend to appear frequently with other Evil Moles and their lesser Mole counterparts, although they can appear with other desert monsters on occasion.

Defeating it will relinquish a Mii's mouth and sunglasses.

Appearance-wise, Evil Moles almost look like the real animal they're based on. All Evil Moles have two stray hairs on top of their head. Their nose is pointy. They possess sharp claws to help them burrow underground. Their fur is dark gray with light gray on their underside. Evil Moles' lower torso and feet are often hidden underneath the hole they pop out from, and are only visible when they're knocked out.

Under the control of the Dark Lord, Evil Moles possess sunglasses and a Mii mouth.

An Evil Mole as it appears in the Journal.

An Evil Mole attacking a Mii. 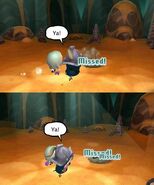 An Evil Mole hiding to dodge its attackers.