Miitopia Wiki
Register
Don't have an account?
Sign In
Advertisement
in: Articles in need of cleanup, Miitopia, Events, Game Mechanics

Events are short cut-scenes that can occur while out adventuring or when checking in on the Mii characters at the Inn. Certain Events can raise or lower a Relationship status between two Mii characters or give the player HP Bananas, MP Candies, Cake, or Gold.

Inn and stable event names are based on their internal names, while other event names on this article and its subpages are conjectural and thus not official.

The following lists all possible Inn events, not counting events related to starting/ending an outing or special cutscenes that occur at the end of the game.

In the Nintendo Switch version, the horse is added as an additional party member. Like the Mii party members, the horse can be bonded with, even during the stay at the Inn (in this case, the horse stays at the stable). All events involving the horse raise relationship between it and the visiting Mii, the amount of which depending on the event and/or its outcome. The following is a list of possible events (outside the special cutscene after the horse's introduction and name decision) that can be viewed in the stable.

Adventure Events happen automatically during exploration. Some events can give you items like HP Bananas, MP Candies, or Gold. Other events can restore or deplete HP (and/or) MP, gain relationship or resentment status, and some can just give information about things in Miitopia or your Miis. Each event occurs only once in each stage, and revisiting the stage where they occurred won't trigger them again.

See Events - Areas for area-based "talking" events which gives more of a feel about the situation of the main game or the area.

These events will only trigger if you have a guest Mii from the Travelers' Hub and are usually dependent on the guest Mii's personality.

Some events are shown in Miitopia: Casting Call, most of them being in the Camaraderie trailer, for the purpose of showing the bond between the Mage and the Cleric. However, Camaraderie mostly dramatizes the scenarios to make a stronger impact. Events are nowhere featured in the Chosen Ones trailer.

The Camaraderie trailer starts off with a scenario similar to the Tripped event. The Mage, while skipping, trips. The Cleric then decides to help them out, leading the two to start their friendship. The two start off with the Exercise event, followed by the Present Event where the Mage gives the Cleric a present. Eventually, the Cleric asks the Mage who their Favorite Person is, to which the latter playfully doesn't answer. Both the Cat and the Warrior stalk these events.

Nevertheless, the events that follow will eventually lead to the Mage and the Cleric's quarrel. The Warrior is seen giving a present to the Cleric, to which the Mage sees. The Mage then reenacts the Tripped event happening like in the beginning of the trailer, except that it happens during sunset and the Cleric doesn't help the Mage. Instead, they are seen laughing alongside the Warrior. After gaining full resentment towards the Cleric, the Mage then trips over the former, similarly to the Tired and Cranky event, except that on this scenario, it was on purpose.

During the end of the Camaraderie trailer, everything is resolved, and the Mage and the Cleric reminisce the events that have come and go during their journey. Similar to the Otherworld event Any Regrets?, the former asks the latter if they have anything they want to get off their chest before the final battle approaches. The Cleric is about to say it, but in the end, prefers to keep it in until it all comes to an end. The two then look at each other endearingly.

There is one event that is shown in the Venture Forth trailer, similar to the New Clothing Talk event. The Cat complements the Cleric's appearance, leading the latter to get embarrassed.

A Mii helps another Mii out with cleaning a room at the Inn.

A Mii buys a present to give to another Mii.

A Mii tells another Mii they have bought a present.

A Mii tells another Mii to have the present.

A Mii gives a present to another Mii.

A Mii asks if it's okay to receive the present.

One of the possible random items given as a present from one Mii to another.

A Mii thanks another Mii for giving them a present they like. 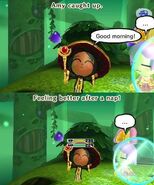 The Mii that was left sleeping returns in the middle of a battle, Their HP and MP restores and gains resentment from one of the teammates.

The Birthday outcome during the Blackout Event

A Mage with the Cool personality gives up on the first attempt of finding something during the Buried Treasure event.

A Thief with the Laid-back personality gives up on the first attempt of finding something during the Buried Treasure event. 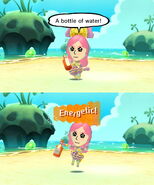 An Energetic Mii about to drink from the bottle of "water" 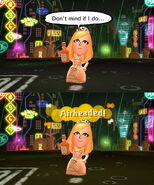 An Airheaded Mii about to drink from the mysterious bottle

A Stubborn Mii refusing to drink from the mysterious bottle

A Cautious Mii throwing away the bottle during the Mysterious Bottle event.

A Mii finds monkey hiding in the tall grass during the Rustling Grass event. 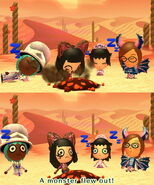 A monster pops out of the hole during the Buried Treasure event.

A Mii hearing their name in the Mii impression/Rumor event. 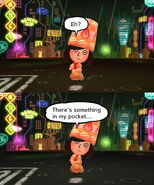 A Kind Mii feeling something in her pocket 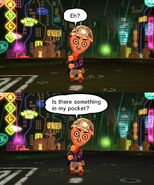 A Laid-back Mii feeling something in his pocket 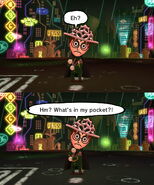 A Stubborn Mii feeling something in his pocket 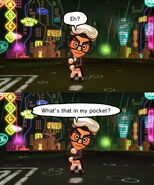 A Cautious Mii feeling something in his pocket 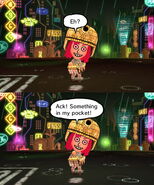 An Energetic Mii feeling something in his pocket 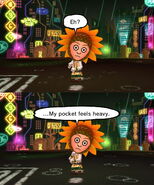 A Cool Mii feeling something in her pocket 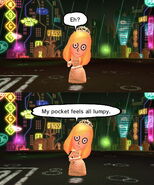 A Airheaded Mii feeling something in her pocket 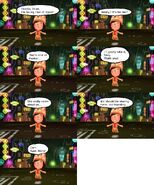 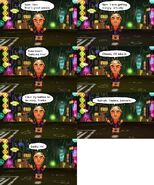 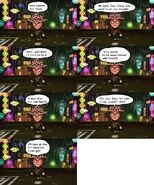 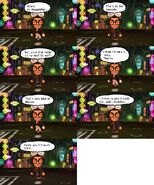 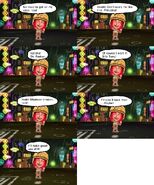 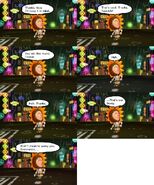 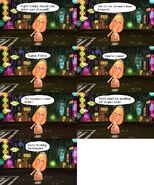 The Tripped event, portrayed with the Mage tripping over

The Cleric offering to help the Mage

The Mage and the Cleric exercising in the Inn, while the Cat watches

The Mage giving a present to the Cleric. while the Warrior and the Cat watch

The Cleric asking who the Mage's favorite person is, with the latter playfully not telling. The Warrior and the Cat are also seen watching them from the beginning of the event.

The Mage, watching the Warrior giving a present to the Cleric 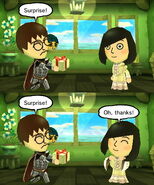 The Present Event once more, only this time the Warrior is giving a present to the Cleric while the Mage is watching

The Mage's fantasy after gaining resentment towards the Cleric (part one)

The Mage's fantasy after gaining resentment towards the Cleric (part two)

An event similar to Tired and Cranky, but with the Mage doing it on purpose to the unsuspecting Cleric

The Mage asking the Cleric if there is anything they want to get off their chest (part one of Any Regrets?)

The Cleric keeping their secret in, waiting until the end of their journey to say it (part two of Any Regrets?) 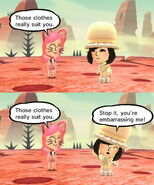