"An elf of the forest, armed with the power of an enchanted bow."

The Elf (エルフ; Elf) is a secret job in Miitopia. Acquire the Elven Charm to unlock this job. The player can find this at the end of Galados Isle in the secret grotto.

Their weapon of choice is the Bow.

Their clothing is called Raiments.

The Elf is a "jack-of-all-trades" sort of job; while not as potent, they are capable of doing just about anything that any of the other jobs can do. They can attack one or all enemies, deal splash damage, put up barriers, counter direct attacks, and even heal HP AND MP. Their main drawback, however, is their sluggish speed and low max HP. They will need to be healed far more often than most other jobs.

The Elf's default attack is single target only. 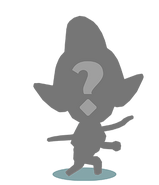 Silhouette of the elf class on the official website. 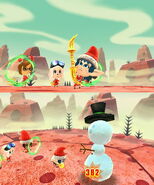 An Elf using their bow to hit a monster instead shooting at it, due to the Mage's Enlarge Weapon
Add a photo to this gallery 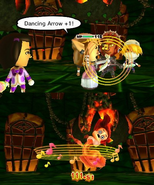 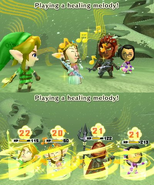 Retrieved from "https://miitopia.fandom.com/wiki/Elf?oldid=37876"
Community content is available under CC-BY-SA unless otherwise noted.