091
The Dragon (Japanese: ドラゴン Dragon) is a boss found in the Dark Lord's Castle. He is the brainwashed form of Dominic.

When the party talks about dragons and if they're real, the boss shows up shortly after.

After defeating him, the Dark Lord's power leaves and he recovers, turning Dominic back to normal.

Not counting the Dark Lord, he is the final boss of Karkaton.

The Dragon is serpentine with four legs and two large wings. His lizard-like head bears two horns, colored bright cyan. A row of teardrop-shaped spikes line his back and his skin is splotchy. He also has two brown Mii eyes instead of Dominic’s normal black eyes.

Prior to encountering the Dragon, the party talks to each other about whether Dragons exist or not, commonly believing that they are from fairy-tales. It is soon after that an actual Dragon appears before them, initiating a battle. In-battle, the Dragon is a powerful adversary, being able to breathe fire on the entire party or roar at them, causing them to become frightened. After a tough battle, the Dragon is defeated, turning Dominic back to normal.

The Dragon in battle. 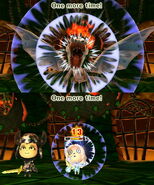 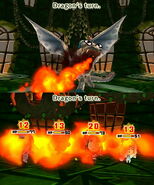