Miitopia Wiki
Register
Don't have an account?
Sign In
Advertisement
in: Monsters, Bosses, Tower of Dread,
and 7 more

252
The Dark Sun (Japanese: 異世界の太陽 Isekai no Taiyou; The Sun of Another World) is a boss found in New Lumos in the 8th District and is the eighth and final boss of the Tower of Dread as well as the final boss of the Nintendo 3DS version of Miitopia as a whole.

The Medal "Extinguished" is gained by defeating it.

It can also be fought daily on its own when defeated.

It looks like the Darkest Lord, albeit colored dark gray with special cyan backlighting (silver in the Switch version). It has one Mii eye and mouth on its face and several Mii parts on its "medals" between the spikes.

The glow behind it is now black, and it does not have a whole face.

The Dark Sun is the hardest monster in the game (in the 3DS version), due to its high stats and similar nature of attacks to the Darkest Lord, so it could be considered a superboss. The difficulty is amplified in the Tower of Dread due to the seven bosses before it.

A team of Mii characters of at least level 40 would be reassuring before facing it. Strong gear, Safe Spot manipulation and great relationships can defeat this thing at lower levels.

However, when fought in the Tower, it is as strong as ever, but with the addition of seven full-power bosses before it, resource conservation becomes imperative.

While it is the hardest out of the District bosses, it is beaten out by the Tower of Despair bosses, especially by the Boss Snurp.

The Dark Sun as seen in the journal

The Dark Sun summoning a Medal 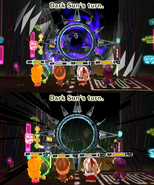 The Dark Sun generating a black hole to attack.

The Dark Sun before it transforms

The sequence of the Dark Sun's transformation 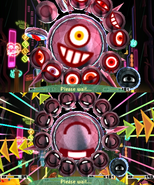 0 damage due to the Mii already at 1 HP when the sun uses its big bang attack.

The Dark Sun with it's guard down.

The Dark Sun before exploding after defeating it

The sequence of the Dark Sun's explosion