Spite
Magic All
One More Time!

248
The Dark Queen (Japanese: 暗黒の女王 Ankoku no Joō, Dark Queen) is a boss that can be encountered alongside the Dark King in New Lumos's 6th District and on floor six of the Tower of Dread. She is the New Lumos variant of the Ice Queen.

The Medal "We're a republic now" is gained by defeating her and the Dark King.

She can also be fought daily on her own when defeated.

The Dark Queen is visually indistinguishable from the Ice Queen aside from being completely black with green highlights. She bears two Mii eyes.

The Dark Queen in the Journal.

The Dark Queen making her first appearance, alongside the Dark King.

The Dark Queen's attempt to turn a Mii cranky. 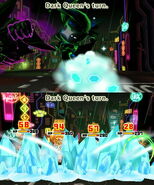 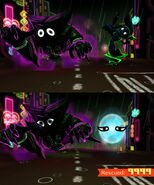