195
Dark Medusa (Japanese: ダークメデューサ Dark Medusa) is a monster in Miitopia. It is a stronger variant of I, Medusa. It can be found either as a regular enemy or as a quest boss.

The Dark Medusa is basically I, Medusa but with pale gray head and upper body, and magenta lower body. Also, in addition to the Mii eyes on the snake "hair" and a Mii mouth on this Medusa's face, a Mii nose is also attached above the mouth part.

A Dark Medusa in the Journal.

A Dark Medusa encountered during the Youngest Fab Fairy's quest.

A Dark Medusa attacking a Mii. 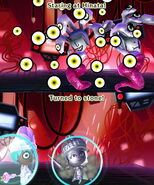 A Dark Medusa petrifying a Mii.

A Dark Medusa being distracted.