The Dark Lord (Japanese: 大魔王 Dai-maou; Great Demon King) is a major antagonist that appears in Miitopia. As a custom character, the Dark Lord does not have a predetermined facial appearance. Like other pre-established characters, however, he has his own appearance and personality.

The Dark Lord was originally a normal Mii that worked in a HP Banana factory, before contemplating whether he would remain satisfied with this direction. After freeing the Dark Curse from a forbidden box, he becomes the first host of the Dark Curse and the main antagonist of the first half of the game.

Long before turning into the Dark Lord, the factory worker was once a normal Mii that worked in a factory that produced HP Bananas, but came to question whether he/she would be satisfied with this direction. It was at that moment that they heard a voice speak to them, promising great power and wealth. Tempted by this offer, the factory worker opened a forbidden box containing the Dark Curse, and was instantly surrounded in darkness as he/she was possessed by the curse.

While possessed, the factory worker could only watch in horror as the Dark Curse used their body to terrorize Miitopia, but was able to find the Dark Curse's motives due to sharing the same conscience.

With his plans in motion, the Dark Curse used the Dark Lord to begin his face-stealing campaign in the Town of Greenhorne. A total of five faces are stolen: a Sassy Child, a female member of the Lovey-Dovey Couple, a Sarcastic Guy, a Carefree Guide, and a Cheery Granny, but leaving the Worried Mother, Lovey Dovey Man and Dubious Mayor. After giving one last warning to the remainder of Greenhorne, the Dark Lord disappears and takes the faces with him. Because she didn't get her face stolen, the Worried Mother grants The Hero an antique charm and sends them on their way.

At the outskirts of Greenhorne, the Dark Lord meets The Hero, who demands that he return the face of the Sassy Child. He tells The Hero that he/she will have to earn it before attaching the face to a Mini Slime and mockingly asking the hero how good they are in a fight. The Dark Lord then leaves the hero to battle the Mini Slime. It is that moment the antique charm glows, releasing a guardian spirit who grants the hero the magical job of their choice.

Some time later, the Dark Lord realizes the hero has rescued four of the five faces he took from Greenhorne, and is now headed to take back the face of the Cheery Granny. He greets the hero upon their arrival, but soon decides its not worth his time attacking the hero at this moment. Instead, he takes the face of the granny and attaches it to an Imp, hoping it will be enough to finish him. As he leaves the hero behind, he threatens that he has a special thing planned for the King within Greenhorne Castle, vanishing to enact his plan.

Attack on the Protagonist and Neksdor

Before The Hero enters the country of Neksdor, the Dark Lord appears during the night and kidnaps The Hero's friends, while sealing away The Hero's powers. The Dark Lord does not appear again until after The Hero convinces the thieving Genie of the Lamp to return his stolen belongings to the people of Neksdor. When The Hero returns to the town of Neksdor, The Dark Lord has already stolen the faces of the Dancing Guide, the Shady Merchant Family, the male member of the Prickly Couple, the Desert Celebrity, and the Genie of the Lamp. Afterwards, he resides in the Great Pyramid, holding the Genie's Face.

After a brief memoriam that the Dark Lord was thought to seal away the hero's powers, the Dark Lord decides to punish the hero by summoning the Genie's face, as well as a Pharaoh "Genie" to attach it to. The Dark Lord, mentioning that this Pharaoh is one of his best minions, sends the pharaoh to attack the protagonist, then leaves to attack the Elven Retreat.

Second Kidnapping and the Realm of the Fey

After seeing that the Pharaoh has been defeated, the Dark Lord retaliates by kidnapping the hero's friends and sealing away the hero's powers a second time, sending them to the same place he sent the Greenhorne friends. Immediately afterwards, the Dark Lord moved on to the Realm of the Fey, wishing to attack the Elven Retreat that existed there. However, he greatly underestimated the elves' powers, and was swiftly defeated by the retreat's guardians, the Fab Fairies. However, just when their guard was down, the Dark Lord kidnapped the eldest and the middle sister, sending the youngest sister into a panic. There, he steals the faces of the kidnapped fairies, and attaches them to an "Eldest Fab Fairy" Owl and an Arachno"Middle Fab Fairy", respectively.

However, the hero arrives and yet again reclaims the stolen faces. This, however, was something the Dark Lord had been anticipating, and once the gate into the retreat is opened, the Dark Lord appears, mockingly thanking them for opening the gate for him. With the seal broken, the Dark Lord promptly steals the face of the youngest fab fairy, and swiftly enters the retreat, stealing the faces of the Scaredy Cat, the Fab Fairies Fans, and the Witch. This lasts until after the face of the youngest fab fairy is rescued, which was attached to a "Youngest Fab Fairy" Frog. Angry that he has been defeated once again, the Dark Lord retreats to his castle in Karkaton after stealing your team again.

Karkaton and the Dark Lord's Castle

After kidnapping the hero's friends one last time, he tries yet again to seal away the hero's powers, but finds he cannot do so this time. Instead, however, he decides to take advantage of the friends he kidnapped, and steals their own faces. There, he uses the faces of the third-recruited friends of Greenhorne, Neksdor, and Realm of the Fey and attaches them to a Burning "Teammate" Golem, a Magma "Teammate" Slime, and a Paincloud "Teammate", respectively. With the help of the great sage, the hero rescues these three faces, before making their way to the Dark Lord's castle. However, he had also utilized the faces of the second-recruited friends from each world, attaching all three to the ferocious Cerberus. The Cerberus is defeated, and the Dark Lord makes preparations for the hero's inevitable arrival.

Finally, the hero reaches the Dark Lord's castle, and the Dark Lord resorts to the faces of the first-recruited friends of each world, attaching each to a "Teammate" Armor, a "Teammate" Demon, and a Study of "Teammate", respectively. Although the Hero once again defeats these monsters, the Dark Lord has one final surprise for them: a large, powerful Dragon. Again, the Dragon is defeated, and now only the Dark Lord stands in their way. At the throne room, the Dark Lord waits for the protagonist to arrive, and taunts them as they say that the Dark Lord will be defeated. A long, fierce battle soon begins.

In battle, the Dark Lord is the End-Boss of Karkaton, and is the toughest enemy encountered by that point in the game. His primary attack involves slamming his hands on a party member, or creating a rock slide that attacks all of the party members. When the Dark Lord loses roughly half of his HP, he will call in Imps to assist him, and steal the face of a random party member to create them. Ultimately, the Dark Lord too is defeated, as the factory worker is released from the Dark Curse. The Dark Curse then possesses the Great Sage, becoming the Darker Lord.

Unfortunately for the worker, this is not the last time he encounters the Dark Curse, and is kidnapped by the Darker Lord in his Sky Scraper. He is later approached by the Protagonist, faceless and flustered. Upon being asked if he is okay, his face appears, and is attached to a Phantom of Evil.

After this Phantom is defeated, the worker is free again, asking if the protagonist remembers who he is. Regardless of their answer, the Ex-Dark Lord tells that he is the Dark Lord, except now as a normal human. He also mentions that he wants to make up for his trouble as the Dark Lord, and asks to join the Hero's party. The hero agrees, and the Ex-Dark Lord Accompanies the player for the remainder of the Sky Scraper.

In-battle, the Ex-Dark Lord is incredibly weak, only able to deal 1 to 4 damage to an enemy by throwing rocks at them. However, this is counteracted by the fact that he also has an infinite supply of HP Bananas, allowing the party to heal infinitely.

Finally, the protagonist makes it to the end of the Sky Scraper, and is ready to ascend to Otherworld where the Darker Lord is waiting. The Ex-Dark Lord, however, stays behind, knowing that Otherworld is deadly for any normal Mii. He says his goodbyes to the protagonist, thanking them for saving his soul from the Dark Curse.

After the Darker Lord's defeat, the Ex-Dark Lord had moved to New Lumos, being employed to warn travelers about traversing the city. This also includes the Protagonist, who is told by him all of the horrors of the city. Despite this, the protagonist ignores him and goes into the city. Talking to him unlocks all the districts.

The Dark Lord appears as a castable character in Miitopia: Casting Call, appearing in two of the three casting scenes.

While possessed by the Dark Curse, the Dark Lord is a large, demonic Mii that is dressed in a dark magician's robe, with golden wristbands around his hands. Around his neck is a medallion displaying an open eye that is used when stealing faces, as well as being where the Dark Curse inhibits his body. He also noticeably has dark, pale skin with a Dracula-esque hairstyle.

When free of the Dark Curse, the Ex-Dark Lord is an average Mii that appears to wear a noble's gown with a kabuki-style hat, emulating the Dark Lord's robes and hairstyle, respectively.

As the Ex-Dark Lord, he becomes much more timid and weak, although thankful to the protagonist for expelling the Dark Curse from them. He is only able to use very weak stones as a guest party member, though he also has an endless supply of HP Bananas from his former employment in the HP Banana factory.

A view of The Dark Lord from the Journal.

Artwork of the Dark Lord overlooking an army of Monsters.

Official artwork of the Dark Lord, among other major NPCs.

The Dark Lord on the map.

The Dark Lord in the credits.

The Dark Lord about to attack The Protagonist Mii with a orb of dark magic during a cutscene. 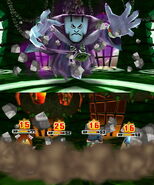 The Dark Lord uses Rockslide on the player and their teammates.

When he summons both his servant imps 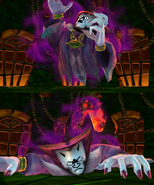 The Dark Lord loosing his powers, before falling to the ground, after his defeat.

The Dark Lord in the Switch version 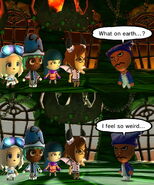 The Ex-Dark Lord, left in a daze after the Dark Curse leaves them. 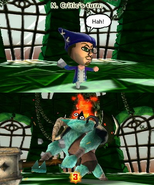 The Ex-Dark Lord throwing a rock at an enemy. 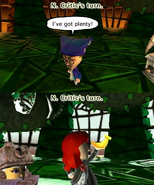 The Ex-Dark Lord giving an HP Banana to a party member.

The Ex-Dark Lord in the credits

The Ex-Dark Lord at New Lumos, being introuduced to the player.

The Ex-Dark Lord looking back at the player when they leave.

The player allowing the now Ex-Dark Lord on the team.

When the player doesn't want them to join.

The tag that appears when the Ex-Dark Lord joins you.

The Ex-Dark Lord defeating a Monster.

The Ex-Dark Lord with 3 other party members