073
The Dark Griffin (Japanese: ダークグリフォン Dark Gryphon) is a monster that appears in Karkaton Ascent.

It may appear alone, or with another Dark Griffins or monster(s). They also appear in pairs.

Despite the fact it holds six pairs of Mii eyes, defeating it only rescues one pair of them.

The Dark Griffin is a dark teal Griffin with a pink beak.

It holds six pairs of Mii eyes on its wings. 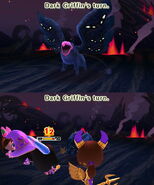 The Dark Griffin attacks a Mii. 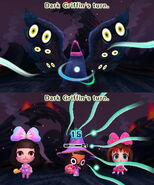 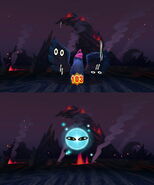