217
The Clever Running Nose (Japanese: インテリはなじん Intelli Noseman) is a monster in Miitopia. It is one of the Running Nose-based monsters. These monsters can be found in the Uncharted Galados, the 5th District of New Lumos, and certain quests.

Its physical appearance is similar to the Running Nose. What makes it different is it being shiny, with the tip of the nose being a bright red, along with socks and shoes covering the legs coming out of its nostrils. A pair of Mii eyes and glasses, which always seem to be squinting, are attached on top of this monster. 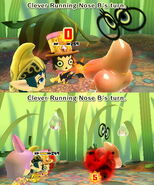 A Clever Running Nose attacking a Mii with the Vampire job. 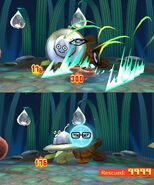 Encountering four of them.

A Clever Running Nose in the Journal.