The Clever Imp (Japanese: インテリデビル Intelli Devil; Intellectual Devil) is a monster in Miitopia. It is a tougher Imp found in Karkaton and Powdered Peaks.

Defeating it will relinquish a pair of Mii eyes and glasses.

The Clever Imp is a yellow-green Imp wielding a gold pitchfork. Its front stripe is green and its pompadour is beige. It wears a pair of Mii glasses and has Mii eyes.

A Clever Imp in the Journal.

Encounting The Clever Imp along with a Pengy. 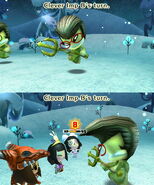 The Clever Imp attacking a Mii. 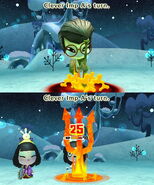 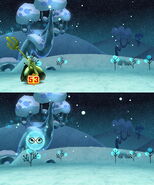