The go-to support role. Tends to the party’s injuries with divine magic.

The Cleric (Japanese: そうりょ Souryo; Priest) is a Job in Miitopia that focuses on party healing and reviving allies. With a high pool of MP and high speed and magic, the Cleric often manages to heal their fellow party members at the beginning of each turn.

The Cleric's default attack is single-target only.

The Cleric's default attack is melee single-target only. 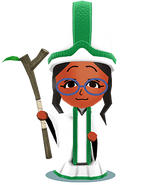 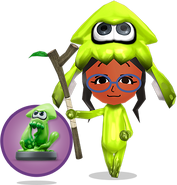 A Cleric dressed as an Inkling Squid

A Cleric with the best possible gear of the Legendary Staff and Legendary Vestments.

Official artwork depicting a Cleric using Cure on a Mage to heal her, boosting their relationship. (3DS version) 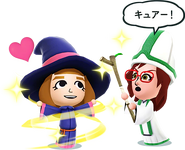 Official artwork depicting a Cleric using Cure on a Mage to heal her, boosting their relationship. (Nintendo Switch version) 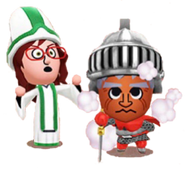 Official artwork depicting a bemused Cleric looking at a Warrior aged up with the “Old” status effect.

The horse bonding with a Cleric. 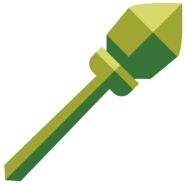 Official Nintendo Switch artwork of a Cleric with makeup applied.