Chests are objects the party can find while walking around on a path. The player can either choose to open them or choose to leave them. If the player opens them, they can find Gold, grub or enemies. If a chest contains a Key Item, however, it'll be automatically opened without player prompt. Chests are not placed at random. If a path is split, there may be chests on different routes.

There's a large variant that usually contains an equipment of a random party member's job. However, if all available party members can no longer upgrade their equipment when the chest is opened, the player will either find some G equivalent to the price of the next weapon/clothing upgrade that would have been received or 5 Game Tickets. If a stage has a chest above its marker when seen on the overworld, this means that there is a possibility that a large chest can be found there (otherwise the stage merely consists of a series of regular chests). However, large chests can also be found in certain stages without the chest icon (for example, one non-"large chest" stage in Peculia contains three paths where two of them will lead to large chests, each depending on the path taken).

Chests can only be opened once, so if the player decides to revisit the opened chests, they will be automatically ignored.

The party discovering a large chest.

A chest that contains monsters. 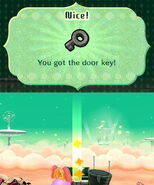 An item pops out of a chest.

An opened chest in the overworld.

An opened chest in Castle View

The party discovering a big chest.
Community content is available under CC-BY-SA unless otherwise noted.
Advertisement