081
Cerberus (Japanese: ケルベロス Kerberos; based on the Greek name) is a boss that appears inside Karkaton's volcano just after the split paths join.

It was first created when three of the hero's teammates attempted to escape before being sadly caught and their faces were attached onto the Cerberus's heads. Its defeat freed these team members.

It is a three-headed blackish gray giant dog with three Mii faces on top of their heads. It wears a spiky collar. It dons the faces of Mii 9 on the left head, 3 on the middle head and 6 on the right head; the second ones recruited (not including the hero) in each of the 3 chapters.

During the first trek through Karkaton's volcano, the player's party is forced to split up because of a falling boulder. Right after both groups rejoin, this boss monster shows up, initiating a battle.

After defeating it, the three faces attached to the monster fly back to the respective teammates, rescuing them.

The Cerberus in the Journal. 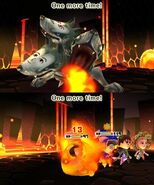 The Cerberus attacking with a fireball.