Camps are areas in the game that can heal the party overnight. Unlike in inns, the player cannot interact with the Mii characters during their stay at a camp.

Camps are encountered in certain stages when the inn cannot be reached before it becomes too dark, however, they do not occur in temporary dungeons. The Mii characters will set up a tent there, and one of the following scenarios will occur during the night. There are four scenarios total, and each one will occur in three specific places each. Like all events, however, these will only trigger once in those particular stages, as revisiting them will not activate this event again.

All scenario names elaborated below are conjectural and thus not official.

The player will have to choose one Mii to stand guard for the night to prevent or warn for any monster attacks. This Mii will not rest and therefore will not have their HP restored.

The night differs depending on the Mii chosen and their relationships with the other Mii characters.

The four Mii characters are stargazing, and then they see a shooting star in the sky. The Mii characters decide to make wishes, and then the player will have to do a minigame involving tapping the same type of bubble three times in a row, then a chest drops containing what was chosen. If the star reaches the other side of the top screen before you tap the same bubble three times, you'll have the chance to try again.

In the Nintendo Switch version, the minigame is no longer present due to the lack of two screens; instead, the player can simply pick from one of the four wish options before the chest drops.

The four things that can be picked are below:

When it comes to monsters, what variety of Snurp and how many they are encountered depend on the highest level of a party member. See the table below for more details.

Note: Encountering the Snurps this way will cause a random Mii to gain the "Terror" status ailment at the start of the battle.

The Mii characters decide to have a BBQ, so they set one up. While the first three are cooking kebabs, the fourth will show up with a mushroom and start cooking that. The player will then have to pick one of the Mii characters to eat the mushroom.

The Mii will either like it, restoring their HP, or hate it, losing some of their HP.

The Mii characters sit around the campfire telling spooky stories to each other. The player's Mii (or any other Mii assigned to be the party leader) begins telling a story, with the other three listening to it.

The third Mii will either like the story, raising their relationship level, or find it too scary, raising resentment. The other two Mii characters do not seem to be affected by this event at all.

After the "Night falls..." transition, an scenario identical to "The Night Guard" happens. While the Cat is chosen to be the guard for the night, they suddenly fall asleep. The Warrior eventually notices, and sarcastically remarks that the Cat did a good job.

The camp event, as shown in the Venture Forth trailer.

A Mii on night guard begins to doze off, but is awake the next day. Nothing else happens.

A Mii finds a mushroom.

A Mii finds a spotted mushroom.

The chosen Mii eats the mushroom, but it turns out to be a bad one. Takes away some HP.

The chosen Mii eats the mushroom, The Mii enjoys it.

The Shooting star mini game in the Switch version. 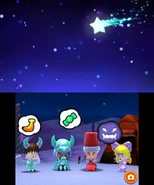 A Mii refusing to listen to the rest of the spooky story. May start quarrels.

Two party members wake up to find two other party members that stayed up all night, instead of the one who was chosen to. (the night guard event)

The party members wake up to find the one who was supposed to be on the lookout fast asleep, HP is restored.

Four party members after a story.

A camp event with the horse.
Community content is available under CC-BY-SA unless otherwise noted.
Advertisement