181
The Brand-New Robot (Japanese: 新型ロボット New Robot) is an enemy which is found in the Sterile Plant and many parts of New Lumos. Strangely, it is also found in cavern areas of Galados Isle in certain quests. Defeating it relinquishes two Mii eyebrows and a mouth.

Brand-New Robot a freshly built robot, so it is very shiny. Its shell is metallic navy blue. The enemy moves on one wheel. The whites of its "eyes" are its never-used laser disc. When struck, the robot's top section pops out briefly. The Brand-New Robot has one Mii mouth below it's "eyes", and possesses a pair of Mii eyebrows.

Despite being "brand-new", it can only ram and never transforms, suggesting that only certain robots have this feature programmed in.

A Brand-New Robot in the Journal.

Encountering two Brand-New Robots along with a Facerberus. 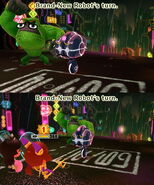 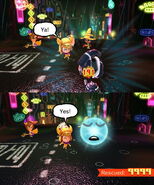