Miitopia Wiki
Register
Don't have an account?
Sign In
Advertisement
in: Monsters, Bosses, Tower of Despair,
and 8 more

001
The Boss Snurp (Japanese: ボス王ピョン Bosu-ō Pyon; Boss King Pyon) is one of the monsters that can be found in Tower of Despair, a location introduced in the Nintendo Switch version of Miitopia. It is the final boss of Miitopia as a whole.

The Boss Snurp is a gigantic Snurp with purple and blue glossy, glitter-like fur. The fur changes color depending on the color of the hexagons in the background. It also sports five rainbow feathers in a crown shape, distinguishing it from the rest of its kind and giving a carnival mask appearance.

This boss performs two actions per turn. It performs three once below half HP. It can also send out Juvenile Snurps. 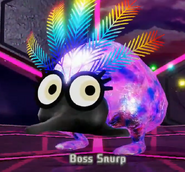 The Boss Snurp in battle.

The Boss Snurp being defeated.

Boss Snurp in the Journal